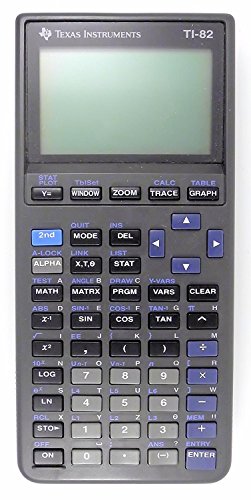 Finally, because of the amount of information needing to be displayed, screens of graphing calculators are bigger than their more traditional counterparts.

In 1993, Texas Instruments released the TI-82, an upgraded version of the TI-81. It was an immediate hit with users and was the de facto standard in classrooms and laboratories across the United States for the next ten years.

Even though it was replaced in 2004 by the TI-83, the TI-82 is a workhorse still easily available on Ebay and commonly used by students in high school and college.

Have a TI-82 you'd like to use? Want to know if its features will work for your purposes? We'll cover all the relevant details below.

The monochrome display screen is 96 by 64 pixels and has up to 8 lines of text with 16 characters each.

It's powered by four AAA batteries and an additional lithium battery to preserve stored data when the primary batteries are being changed.

The TI BASIC programming language is also included, and there's an i/o port to connect to other devices.

Almost all buttons have two functions, and some have three. The primary function is printed on the button.

Secondary functions are printed in blue or gray above the button and are accessible after first pressing the 2nd key.

Tertiary functions, if available, are listed in white above and to the right of the button and are accessible after first pressing the ALPHA key.

Depending on exactly which version of the TI-82 you have, there will be some design variations.

After being introduced in 1993, the first redesign took place in 1999 when the original sloped screen was reconfigured, and the body of the calculator was made more contoured.

A second redesign in 2001 produced yet another slightly different case style, improved screen quality, and internal circuit board changes which reduced production costs.

The TI-82 can be a bit daunting at first, especially as multiple functions are tied to one key or button. Here's an overview of the basics you'll need to know to get started.

Once you're familiar with the basics of using your TI-82, you'll be ready to move on to its more specialized features discussed below and which give the calculator its real power.

For the nuts and bolts info on how to perform these operations, however, you should refer to the official TI-82 Graphing Calcula​​tor Guidebook.

Additional special functions include the ability to change from degree mode to radian measure, graphing functions on an interval, and graphing trigonometry functions.

You can also use the LOGIC features to include operators like "and," "not," and others to create truth tables or even Boolean algebra.

In addition, you can find the terms of sequences, recursion formulas, and the arithmetic of lists.

Programming on the TI-82

Of course, beyond being a graphic calculator, another powerful feature of the TI-82 is it comes with the TI BASIC programming language.

This allows users to write programs to perform ongoing tasks and calculations instead of being forced to do each one individually.

First, you'll access the program editor by pressing PRGM. Then, select NEW on the menu and press ENTER. After that, you'll be prompted to name your new program.

From there, you'll go to the program editor where you can key in your program using commands available by pressing the PRGM key.

Once you're done, you can access all your saved programs from the home screen by pressing PRGM, then EDIT, and then selecting the program you want to run.

Check out this t​​utorial to learn how to create a simple program using most of the commands available in TI BASIC.

The TI-82 is a much-loved calculator, and there is plenty of information available to help you navigate its use.

For example, this over​​v​​iew of its specifications and additional resources is a good place to start. Another useful site is TI-Freakware which is devoted to all things Texas Instruments.

Finally, there are many instructional videos available on YouTube:

Despite being discontinued by Texas Instruments in 2004, the TI-82 is more than just a collector's item. Instead, its power and versatility—and low price on ​​Ebay—make it an excellent starter calculator for math students.

Plus, once you're thoroughly familiar with its operation, you'll be ready to move up to a calculator with even more bells and whistles if the need arises.

Want to learn more about graphing inequalities with a calculator? Check out our guide to the best resources available to do this!